I started using LiveJournal in January 2001, but after 16 years, I am going to start using Dreamwidth: http://squirmelia.dreamwidth.org

I travelled by coach from Riga to Vilnius and on the coach was a device that allowed you to choose music to listen to, as if you were on a plane! There was a rock section and it felt great to be travelling through Latvia and Lithuania, staring at the unfamiliar countryside, with System of a Down's Chop Suey! playing, followed by Disturbed's Down With The Sickness.

Drinking coffee in a revolving restaurant at the top of the Vilnius TV Tower, listening to the creaking and admiring the scenery. The sun is shining and the sky is blue and I am happy at this moment.

I took the ferry across from Helsinki to Tallinn and spent the time staring at the sea, listening to a bingo game that took place in Finnish, and also to the music that was played there. I watched people dance and wondered then why I didn't have someone to dance with. "Whatever will be, will be," they sung. Yes.

That afternoon, she mostly visited places of worship in Helsinki.

She visited the Uspenski Cathedral, red bricked and green roofed, and then the Lutheran Cathedral, white and neoclassical.

She visited the Kamppi Chapel by the shopping centre, with large stones inside that were soft.

She visited the Temppeliaukion Kirkko (the rock church), which was the best place of worship she visited that day, built into the rock, with music playing in the background, and she sat there for a while, listening.

Then she went to an exhibition - Mystical Rapture, which had figures with buckets on their heads. The description said, "Mystical Rapture is about the moment when control lets you down. It seems to conjure up something forgotten or hidden."

She took a ferry to Suomenlinna, a sea fortress in Finland.

She visited the church, which was also a lighthouse.

She looked at the Vesikko Submarine, pink buildings, abandoned green phoneboxes, and a river which had chunks of ice floating on it.

She found dark tunnels to explore, which had stalactites growing in them. She was glad she could use her phone as a torch.

She walked from one island to another, crossing bridges, and it was then that it started to snow.

She found out that the streets on Suomenlinna don't have names. Postal addresses just consist of the letter of the island and the number of the house. 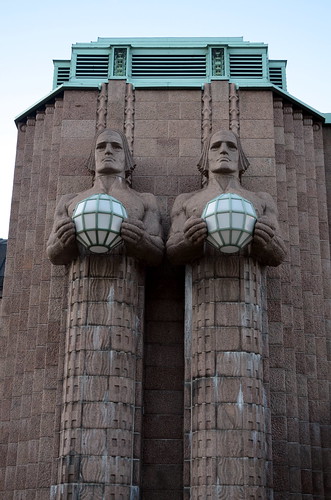 She arrived in Helsinki, took a tram and then she met a parade of concrete turtles, near to the docks. The sky was blue that day.

She stared up at the statues and buildings, as she wandered around the city.

She visited a department store and then that evening, ate pulled oats, cinnamon buns and marzipan covered cakes that she had purchased there.

She wore snowshoes while she hiked across frozen lakes and through snowy forests, where lichen and juniper berries grew.

She stopped for a while and drank a cup of warm lingonberry juice with lingonberries floating on it, and then ate a cinnamon bun and some coffee that had been heated on the campfire. Two women sat across the fire from her and started singing, but she could not understand the words, as they sung in Finnish. They seemed friendly though and asked where she was from, and explained that they don't usually speak to strangers, apart from if they are in the forest (as they were then) or if they are drunk.

She walked past a tree that looked like it had been burnt, but actually, a chaga mushroom had grown there. She looked at the different kinds of lichen growing in the forest and remembered she dreamt about seeing lichen while snowshoeing.

Later that day, she returned to Helsinki and visited the Design Museum there. She looked at a MikroMikko computer made by Nokia, screenshots of Finnish computer games, the design of characters in Angry Birds and a model of Futuro House.

She sat on a bench in the middle of a sandy beach, and stared at the sea, but it was frozen. When she walked by it, she could hear it creaking, crackling, the ice melting. She looked into the distance and saw blue pylons, on tiny islands, and crows, standing on the ice.
Collapse