She was admiring his Mario rucksack, when he turned around and looked at her. "What am I doing?" he said, not to her, but to himself and he sounded confused, and she left the station after that. 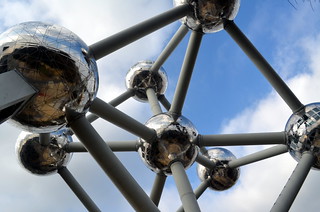 I took the Eurostar to Brussels and listened to talks about open source design, augmented reality games, and wearables at FOSDEM.

I walked through subterranean tunnels of the Senne and the Chaussée de Mons drain, at the Sewers Museum.

I stared at surrealist paintings in the Magritte Museum.

I wandered around unusual musical instruments and listened to them on headphones in the Musical Instruments Museum.

I looked at Belgian comics in the Comic Museum and figurines of Smurfs and Tintin in the Museum of Original Figurines. I played a game of Asterix on the Sega Master System.

I met Steve N at the Mannekin Pis and we joined many tourists in watching a statue of a little boy wearing a suit, pissing.

I went to the Delirium Cafe to meet other FOSDEM people, but it was terribly crowded. I did manage to find some Ingress people though.

I marvelled at the Atomium and walked inside it.

I gazed at different objects made of plastic at the Plasticarium at the Art & Design Atomium Museum.

Back in the UK:

I looked at maps of Fairyland and other excellent maps at the Mapping Late at the British Library, with

My mum and I visited Hampton Court Palace and found our way to the centre of the maze!

I visited Littlehampton and ate lunch on the beach, staring at the waves, walked past colourful beach huts, and sat on the UK's longest bench. I saw sundogs: three altogether that day. At one point, two appeared in the sky at once, rainbows either side of the sun. On the way back, I looked up at the sky from the train and it was a glorious pink. I sat on West Beach and stared out at the sea for a while, watching the waves while the sun shone brightly.

I caught up with friends at Pub Standards and it was great to talk to them.

I saw glimpses of something out of the corner of my eye at Kinetica. I saw pretty things moving and swirling.

I listened to lightning talks at Ladies that UX, at Moo's office.

I found meter cards that date back to the 1940s while clearing out the cupboard next to my gas meter.

I visited Pilvi Takala's The Committee exhibition at the Pumphouse Gallery, which I found inspiring. I bounced on the Five Star Bouncy House! Bouncing makes me happy! I also played table tennis with my mum inside the gallery.

I walked around Battersea Park and to the Peace Pagoda, and then along the river, to outside Battersea Power Station, to see how the developments are going. There is a red phone-box which you can stand in and listen to stories about the power station, from people who worked there.

I tried out having an extra thumb, which I operated with my foot. I listened to fascinating talks on subjects such as recording music onto DNA and then blowing it as bubbles.

I stepped aboard a spaceship. (Well, it looked like a spaceship, but was actually, Futuro House, which had landed on the roof of Central St Martins.)

A robot fist-bumped me on my birthday and I ate a robot brownie, at the Robots exhibition at the Science Museum.

I ate marmalade on toast ice-cream.

I completed the Brussels Grand Place banner in Brussels.

I had drinks with Ingress players at the Duke of Sussex, one evening.

Everything seemed to be going wrong this year, from a leaking roof and a drenched bed, to leaking gas pipes and having no gas for a few weeks (no hot water, heating, oven), to hurting my foot by stepping on a plug, to having a cold, a pesky cold. I wanted things to improve. I wanted my luck to change.

I visited Waitrose and found some ingredients that claimed to bring luck:

While clearing out the cupboard next to my gas meter, I found meter cards that date back to the 1940s: 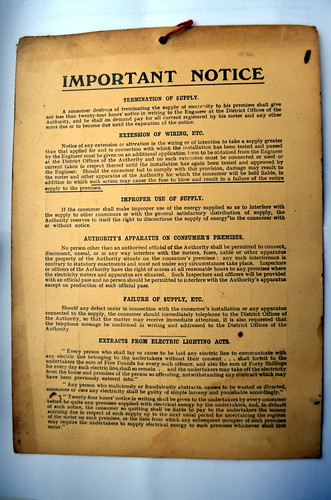 I wonder who lived in my flat then, 70 years ago now. 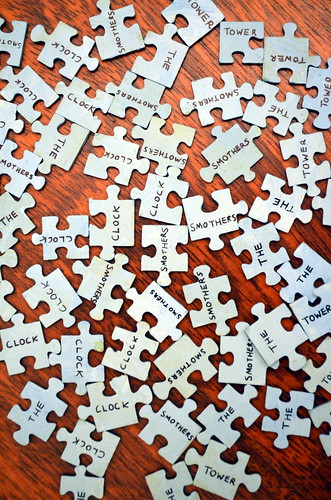 I found jigsaw pieces that I had painted blue and written on a long time ago now, inspired by the clocktower in Southampton. I think my intention was to scatter them around the town, but I never did, so here they are now.

I gazed at the longest Lego bridge in the world, and then in the virtual reality, passed the ticket gates at Victoria Station, made my way down an escalator, waited on the platform and then got on a tube train. There were no people or seats on it and when it started to move, I didn't move with it, and just floated there, above the tracks. This was at the Institute of Civil Engineers, which I visited with

I did some of the actions to Dingle Dangle Scarecrow and attempted to recite nursery rhymes for Monika and met Emilia for the first time. We took a walk around Kingston, through the town and next to the river, and ate crepes.

I stared at bin bags and cigarette butts made of bronze, but that looked real, at the Newport Street Gallery, at the Gavin Turk exhibition. I also ate brambleberry crumble in the Pharmacy cafe, which had pill shaped stools and wallpaper with pictures of drugs, and I drank coffee with my mum.

I had leaving drinks with colleagues and at the end of the night, we ended up dancing on the stage at the Royal Vauxhall Tavern.

I walked around a bed that had wings, but was weighted down by a large rock on it, and I peered at paintings of towers made of containers, set amongst apocalyptic landscapes. I looked up at staircases with clothes hanging off, and piles of bicycles and cluttered rooms, and it all quite foreboding, at Anselm Kiefer's Walhalla exhibition at the White Cube.

I took a ride on the Greenford Inclinator and that was definitely more exciting than taking the stairs.

I ate an "Everyday Luxury" KitKat - a KitKat from Japan, topped with cranberries and almonds.

I played on the swing at St Pancras. (Again.)

I cried a bit while watching Manchester by the Sea with

doseybat, but was cheered up by dessert soup. Coconut sago soup with red bean dumplings, yum!

I jumped aboard a boat at Westminster and the sun was setting then and everything looked pink and beautiful. I arrived in Canary Wharf and wandered around the Winter Lights festival. I stared at patterns projected onto a sheet of water, and glowing words, "You've gone touching leaves in the moonlight." I wanted to touch leaves in the moonlight right then.

I saw Sumiko Okubo's A poem of the harvest exhibition at the Riverside Gallery. I looked at photos of the Feminist avant-garde of the 1970s at the Photographer's Gallery. I saw a survey of sculptures and drawings, 1959 - 2006, by Ken Price at Hauser & Wirth. I saw a trippy video at the Tate Britain, in Rachael McClean's Wot U Looking at? I walked through

In the Caroll/Fletcher Gallery, I looked at screenshots from a website where US citizens could sell their votes to the highest bidder, which was part of Looking at one thing and thinking of something else: Part 4.

"Hey babe, take a walk on the wild sign," the neon lights said at the Lights of Soho, in an exhibition displaying work from God's Own Junkyard by Chris Bracey.

I walked from Great Missenden to Amersham, via Penn Wood, with

sbp, and friends. I stared up at a pylon, saw a gorilla advertising a pub called "The Red Lion", walked through kissing gates and thought about BS5709, walked across frozen mud and saw pretty frosted leaves, and walked through squelchy mud.

I saw Paterson at the cinema with

doseybat and felt like I should write more on LiveJournal. I used to write a lot, but these days, I barely write anything, and I miss it.

I walked through a white floaty passageway that had faces on it, and watched a video highlighting mental illness at the Lose your mind exhibition at the Stables Gallery by Oi Nuen Sprunt and Sarah Hacking-Brian. It made me feel a bit sad and I wrote on a piece of paper and hung it in the gallery, "everything will be okay." Someone else had written that it made them think of Halloween. Outside the gallery, there were a band of pirates, running and screaming.

I walked past the billboards at Piccadilly Circus when they were turned off and black, advertising nothing.

I cross-stitched an Inky PacMan ghost and glued it onto a pendant so that I can wear it as a necklace.

I reached level 14 in Ingress and it was then that the seagulls filled the sky.

I wandered around Borough Market and did the cheese banner with

grandedgemaster. Just before we started, we saw a phonebox with a plant growing in it.

I walked around Wembley, which was not an area I knew very well, completing the Warrior of Wembley banner. I also went to see one of the great trees of London - the Wembley Elm.

I went to Manchester Square for a roll, one cold and wet night, and we had drinks in the Barley Mow and the Beehive.
I also attempted to attend Pub Standards that night, but couldn't see anyone.

grandedgemaster and I walked from Hammersmith to Brentford on a Hidden London Walk. The walk took us around Chiswick House gardens, and we looked at the lanterns for the lantern festival that were being constructed, and it was interesting to look at them in the daylight and get more of an idea of how they were made.

I stared at reflections in the canals, as I walked beside them, from Paddington Basin to Little Venice to Regent's Canal to Primrose Hill to Camden to Granary Square to Angel to Kingsland Basin to Broadway Market to Victoria Park to Hackney Wick to Mile End to Limehouse. Water Lovely Walk. I walked it in sections, gazing into the water and past the boats. I tried to take a shortcut, but fell in some mud smashed my phone and grazed my fingers. Near to Paddington, by the canal, I looked at photographs of swirls of light, long exposure light paintings - Seeing the light by Andrew Whyte. I saw a piece of old London Bridge in Victoria Park. I saw gasholders, street art, swans, and ice where the canal was frozen in places.

I attended the Seven Deadly Sins Late at the Natural History Museum, and then the Out For Revolution Late at the V&A. I looked at fake Russian stamps with manhole covers on at the V&A.

I made a Chaos glyph out of Sugru, painted it silver and hung it on a necklace, which I wore one night.

I like noticing the small differences when I visit different countries. In Brussels, I noticed the ticket machines with a dial to turn to select your ticket and the escalators that don't start moving until you get on them.

I stood at a station, waiting for a metro, and there was music playing, and that made me feel somehow like I was in a movie.

Brussels has a pre-metro, as well as a metro, and these are actually trams that may go underground. I thought I had got on the metro, but later found it was actually a tram (pre-metro).

It was then that I stepped aboard a spaceship. 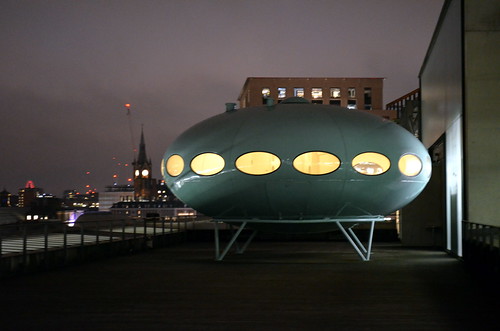 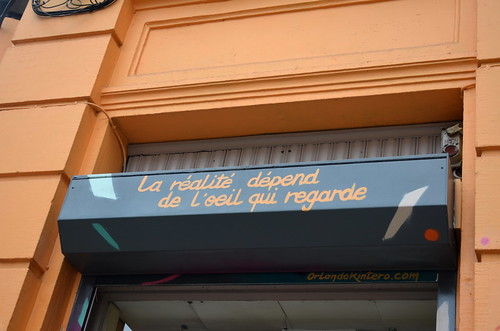